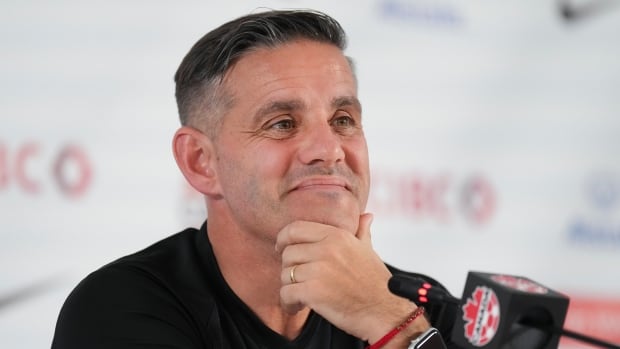 An emotional John Herdman has apparently given Croatia some bulletin-board material ahead of its World Cup showdown with Canada on Sunday.

Immediately after Wednesday’s 1-0 loss to second-ranked Belgium — a game that saw No. 41 Canada dominate play but fail to score — Herdman shared what he told his players in the post-game huddle on the field.

“I told them they belong here and we’re going to go and eff— Croatia,” he said with a smile in FIFA’s official post-game pitchside interview. “That’s as simple as it gets.”

A loss to No. 12 Croatia and Canada’s hope of advancing to the knockout round out of Group F evaporates.

Asked about Herdman’s comments, Croatian coach Zlatko Dalic said everyone has their own communication style.

“I’m not sure how nice it is to say something like that but it’s his right,” he added through an interpreter. “I think we need to show on the pitch that we’re better.”

Watch as Andi Petrillo takes a look at the Canada vs. Belgium game at the 2022 World Cup in Qatar with guests including Ariel Helwani!

On Thursday, a Croatian reporter asked Herdman about his comment.

“Did you really say after last night’s match that you were going to F-word Croatia? And if you did, is that underestimating Croatia as runner-up of [the] last World Cup?”

Herdman did not back down, but was more diplomatic this time around.

“Great question,” he said. “And yeah, I did. You say those things in an impassioned moment, trying to inspire your team in a huddle. And when you’re asked the question what you said in that huddle, yeah, it was what I said.

“I mean no disrespect to the Croatian team and Croatian people, but at the end of the day it’s a mindset that Canada’s going to have if we’re going to have three points against one of the top teams in the world. And it’s the mindset that we took to Belgium. We have to. It’s part of ‘New Canada,'” he said referring to the label he had given his team.

Asked about his take on the Croatian team, Herdman called its midfield trio “the best in the world,” saying it will be a privilege to play Luka Modric whom he called “arguably the generational midfielder of his time.”

“And these [Canadian] men get a chance to compete against him and we’re excited.”

Herdman also said Canada achieved two of its objectives in the loss to Belgium, a result that earned the Canadian men plenty of praise but no precious World Cup points.

Canada wanted to be fearless and to entertain in their return to the soccer showcase after a 36-year absence.

“That was a commitment from this group. We achieved a performance that we’re proud of,” Herdman said Thursday.

Now Canada must play for its World Cup future, knowing a loss Sunday against No. 12 Croatia will end any chance of advancing past the first round.

Croatia will increase its total points to four if it can dispatch Canada. And no matter happens in the Belgium-Morocco game in Sunday’s other Group F matchup, one of those teams will also finish the day with four points. A loss Sunday and the Canadians can finish with no more than three points.

WATCH | How Brampton became the center of Canadian soccer:

With seven members of Canada’s men’s World Cup roster having ties to Brampton, players and Brampton locals explain why the city produces so much talent.

Herdman noted that his players left it all on the line against Belgium.

“They broke personal-best records in their physical performance. I mean that was guys pushing genuine PBs,” he said. “It was actually quite special what we saw in terms of the high-intensity running and total kilometers. And then they’ve got to go do it again.”

Herdman says “statistically” the Belgium outing was a “winning performance,” as was a 2-0 loss to No. 14 Uruguay in a tournament warmup last month.

“It’s those behaviors that we’ll continue to work on. That’s what the players see in the review meeting today,” said Herdman. “And we’ve got to close some gaps going into this meeting with Croatia, who are a hell of a team.”

While Herdman tried to take a glass-half full look at a contest that saw Canada launch 21 attempts on goal but put only three on target, he acknowledged feeling a swirl of emotions right at the final whistle.

“I was a bit angry. That was the passion at the end of the game when I brought the lads into the huddle. It was like that pride but also frustration — deep frustration that we let three points slip through our fingers that game,” Herdman said.

While he said Canadians in attendance left “feeling probably real pride in being a football fan of Canadian soccer,” the performance failed in another way.

“At the same time we’re here to progress through the group stage,” he added. “We keep seeing we can see the [World Cup] final [Lusail] stadium right from our hotel. We’re like this close to it. We had to take three points [Wednesday].”

From unbridled excitement to nail-biting anxiety, fans across the country were with Team Canada every step of the way as they played their first match at the 2022 World Cup.

Herdman’s wife and two children were at the game, sitting two rows back of the Canadian bench.

“I remember turning to [my son] when Stephen Eustaquio nutmegged [Kevin] De Bruyne. The two of us were looking at each other in awe,” Herdman said.

He was able to spend an hour to 90 minutes with the family. But he said sleep did not come easily. “We were pretty wired.”

The Canadian starters had a light day at a lunchtime session Thursday under bright sunshine, with the temperature at 29 degrees C, at their training session north of Doha. Wednesday’s substitutes and non-starters had a more active workout.

“Recovery is what this is about,” said Herdman. “A real mental regeneration and physical regeneration to be able to just go and put it all out there against Croatia.”