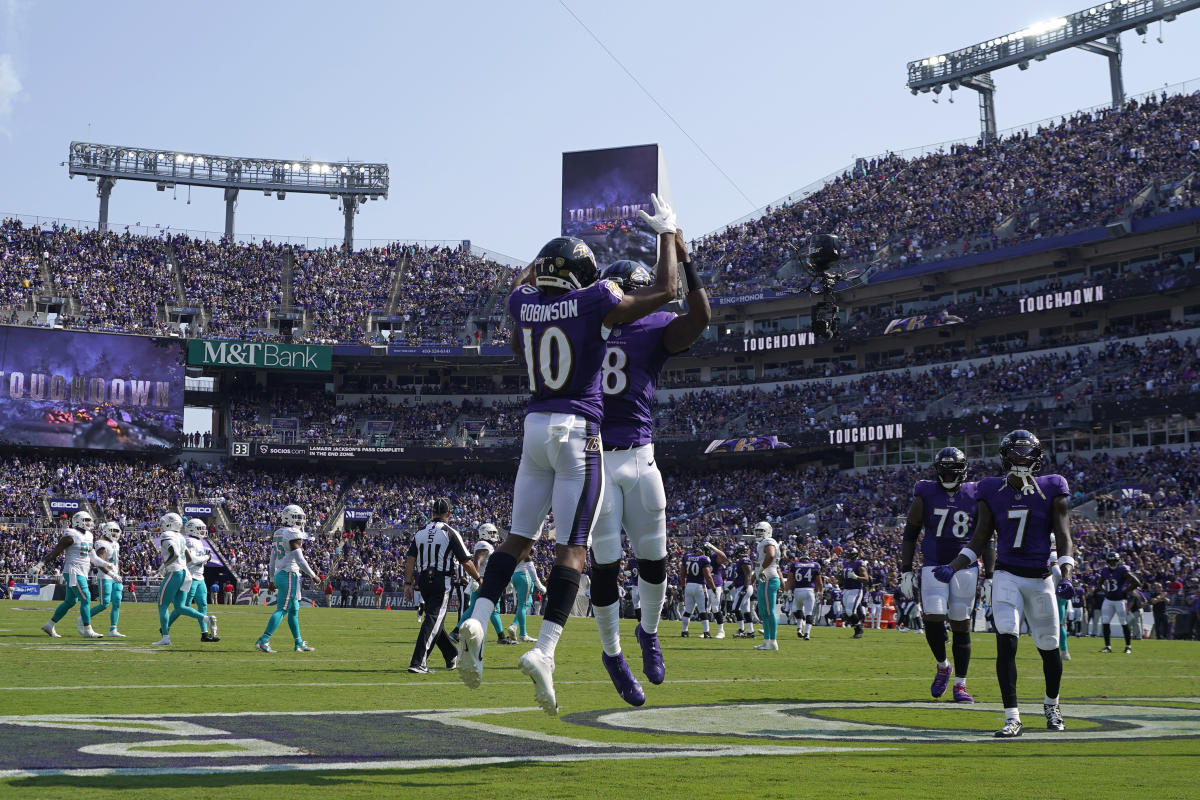 The downturn in offense from the first two weeks of the NFL season has not touched all corners of the league with a handful of players and teams putting up staggering numbers.

Never was that more evident than from Miami’s comeback win at Baltimore last week.

Scoring and passing efficiency are down significantly from recent years and at their lowest level at this point of the season since 2017, with the 21.4 points per game average down from 24.0 last year at this point and the second-lowest since 2011 to the 20.1 points per game in 2017. The 90 passer rating across the league is also the lowest through two weeks since the 87.9 in 2017.

But there was plenty of offense on a record-setting day in Baltimore on Sunday.

Tua Tagovailoa threw for 469 yards and six TDs, becoming the ninth quarterback in NFL history to throw for at least 450 yards and six scores in the same game.

Baltimore’s Lamar Jackson also had a noteworthy day, becoming the first player in NFL history to have a TD pass and a TD run of at least 75 yards in the same game.

Jackson threw for 318 yards and three scores and ran for 119 yards and a TD. Jackson became the first player in NFL history to have multiple games with at least 100 yards rushing and 300 yards passing, also doing it in a playoff loss to Tennessee in the 2019 season.

The Ravens and Dolphins weren’t alone in putting up some prolific numbers.

Jared Goff and the Lions became the fifth team in the past 10 years to score at least 35 points in each of the first two games, joining the 2020 Packers (Aaron Rodgers at QB), the 2020 Seahawks (Russell Wilson), the 2018 Chiefs ( Patrick Mahomes) and 2013 Broncos (Peyton Manning).

Second-year receiver Amon-Ra St. Brown has played a big role in the success with 17 catches for 180 yards and three scores. St. Brown has tied an NFL record with eight straight games dating to last season with at least eight catches, joining Antonio Brown (2014) and Michael Thomas (2019).

Also on Monday night, Philadelphia’s Jalen Hurts threw for 333 yards and ran for 57 for his third career game with at least 300 yards through the air and 50 on the ground.

Only Steve Young (eight), Josh Allen (five), Wilson (four), and Mike Vick (four) have more of those games in the Super Bowl era.

It was a rough week in the AFC North with all four teams losing on Sunday. This was the ninth time since the beginning of the eight-division era in 2002 that all four teams in that division all lost in the same week. It last happened in Week 3 of the 2019 season.

The eight weeks with an 0-4 record for the AFC North are the second most for any division in that span, trailing only the 10 for the NFC West. It has happened five times each in the AFC South, NFC East and NFC North, three times in the NFC South, twice in the AFC West and never in the AFC East.

The AFC East was on the other side of the equation with all four teams winning, including three head-to-head matchups against the AFC North.

The offseason upgrades to the offensive line in Cincinnati haven’t helped keep Joe Burrow clean so far this season.

There hasn’t been much to cheer for when it comes to football in the New York City area the last few years with the Giants and Jets posting the worst records in the NFL since the beginning of 2017.

That’s what made Sunday so rare. The Jets rallied from 13 points down in the final two minutes for an improbable win at Cleveland and the Giants beat Carolina at home. That marked the fifth time in the past six seasons that the two teams won in the same week.