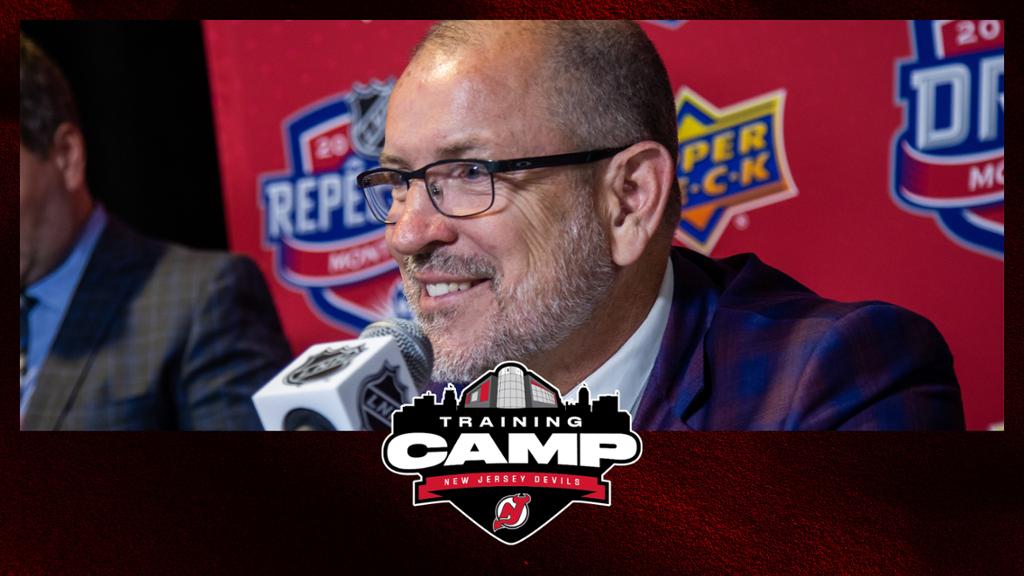 Training camp has arrived, and with it comes the eternal hope that springs from potential and possibility. That feeling flows throughout fanbases and all the way to the top of every organization in the National Hockey League.

“I’m sure (Devils head coach) Lindy (Ruff) and 31 other teams will tell you today is the best day of the year,” Devils general manager Tom Fitzgerald said, “where you get to see the fruits of your labor in the off-season. You see the growth of your young players come together on Day 1 of training camp. Excitement is an understatement. A lot of anxiousness to see how we pull this together and how they come together sooner rather than later.”

The 2022 off-season was a particularly laborious summer for Fitzgerald and the Devils, both on the ice and off. The Devils added several players to the roster, including two-time Stanley Cup champion Ondrej Palatgoaltender Vitek Vanecek and veterans Brendan Smith and Erik Haula. Off the ice, the club renovated its coaching staff with the additions of Andrew Brunette as associate head coach and assistant coaches Ryan McGill and Sergei Brylin.

“Creating depth, creating competition,” Fitzgerald said. “You talk about a meritocracy, that’s really what we want to create. We want guys to earn it.”

It isn’t just the outside additions that have improved the team’s depth and competition. It’s also coming from inside the house from players like Fabian Zetterlund, Alexander Holtz and Jesper Boqvist.

“Everybody can count and figure out the numbers. We think that’s a real good problem,” Fitzgerald said. “It also shows the growth of our young players pushing up from underneath. I always say pushing up from Utica to try to push out some ‘weeds’ and really create that competition.”

While the added depth at forward and defense are important, the greatest importance was placed on bolstering the club’s goaltending pieces, an Achilles’ heel last season that hampered the club’s prospects due to ravishing injuries.

The Devils traded for Vanecek from Washington to fight for playing time Mackenzie Blackwood. And, eventually, Jonathan Bernierwho skated and took shots at camp, may join the fray once he fully heals from his hip surgery.

“The summer checklist was to improve our goaltending, or at least make it deeper, and I believe we’ve done that,” Fitzgerald said.

The crease is likely to be Blackwood’s to lose. The team still has high hopes for the 25-year-old second-round pick from 2015. Blackwood showed great potential early in his career, but a bout with COVID and a lingering heel injury thwarted his 2021-22 campaign.

“We do trust (Blackwood). We believe he can be the goalie we saw a year-and-a-half ago, two-years ago,” Fitzgerald said. “Injuries happen. This guy, he’s never really had to deal with an injury in the past. That’s behind us. Today is Day 1 of a new year.

“We believe there is a high upside with Mackenzie Blackwood. He’s going to get the opportunity to get back on the horse and show us who he really is as a goaltender.”

There will be new voices in the locker room, but also on the bench.

Brunette, an interim head coach in Florida last year, led the Panthers to 58 regular-season wins (a franchise record) while finishing with a nomination for the Jack Adams Award for best NHL coach. Brunette brings with him a decorated resume as a player with over 1,100 games played, an assistant coach and front office manager.

McGill served the past five years as an assistant coach with Vegas under Peter DeBoer and Gerard Gallant. Brylin, who spent his entire 13-year NHL career in New Jersey while collecting three Stanley Cups, joins the NHL club after serving the organization for the past decade in the American Hockey League.

“The exciting part is you have this whole new knowledge tank that you can dip into,” Ruff said. “You can argue about playing this way or trying that way. We have preseason games to try different pieces with different players.”

The new coaching staff spent a lot of time over the summer reviewing video and discussing ways to change or tweak the club’s play for the upcoming year.

“Everybody’s input creates value for me,” Ruff said. “It isn’t my way. I want this to be our way. How do we feel? Let’s make a decision. We’re all in. This is the way we’re going to play it, and then move forward.”

One such area was the club’s defensive zone posture when opponents entered the zone off the rush.

Ultimately, it falls on the shoulders of Ruff and his staff to get his team to gel and come together. And more so than the X’s and O’s, that will be the biggest task that lies ahead.

“If we do it from Player 1 to Player 18, the guys dressing up front and the guys on the back end, we know we’ll be a better team. It’ll be a process of pushing each other and holding each other accountable to the standard that we need to play at.”

That process will take some time. It will be… a process.
“This isn’t about the end result. This is about the process,” Fitzgerald said. “It’s about making sure we have the right process in place each day. You practice the right way. You create the right details and habits in your game. You parlay that into your games. We don’t want to put the cart before the horse. The process will take us to where we want to go. I truly believe that. If we put one foot in front of the other and continue to do the right things, believe the right things, push each other, keep each other accountable , build that type of culture.

“The standard here is high. Where that line is, we need to get to that line. Those players, coaches, myself will push each other every single day to be the best we can. Where that takes us? We think we have a good team. We think we have great pieces long haul. Now’s our time. Why wait? Play the way we’re capable of playing, do what you’re supposed to do, support one another, trust one another, let the process take care of the result.”