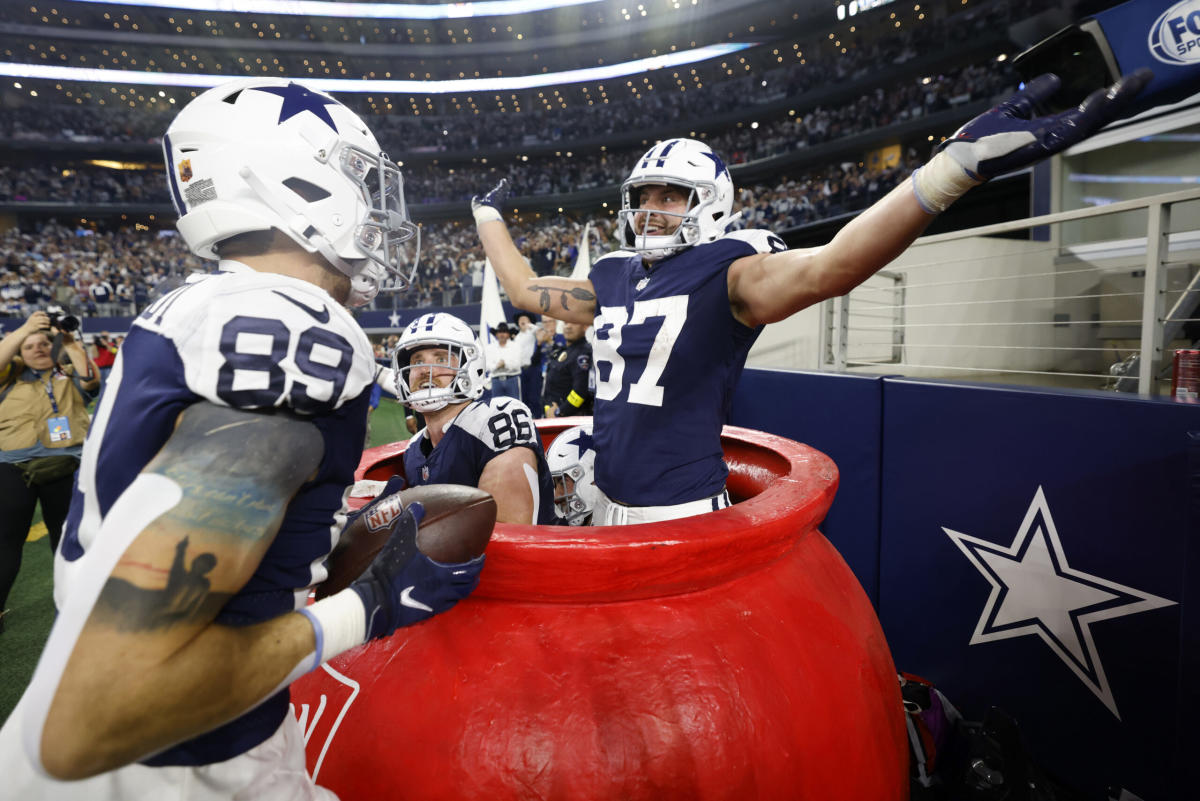 After a sloppy first half that looked like an awkward Thanksgiving get-together, the Cowboys tight ends took over after intermission, playing the role of the fun uncles who assume control of game night and make sure everyone leaves with a smile.

Dalton Schultz and Peyton Hendershot scored all three of the Cowboys’ second-half touchdowns, while Schultz and Jake Ferguson combined to catch all seven of their total targets from quarterback Dak Prescott and contribute 88 receiving yards in the 28-20 win over New York. Giants.

By the end of the evening, it felt like the tight ends – along with fourth-stringer Sean McKeon – were simply toying with the Giants. So it was perhaps fitting that the foursome ganged up for a group celebration after Hendershot’s two-yard rushing score that kicked it old school all the way back to the Chuck E. Cheese days.

Ferguson, the rookie out of Wisconsin, says he came up with the Whac-A-Mole idea upon seeing the iconic red kettles in the end zone at AT&T Stadium.

“I think we just saw the kettle and we were brainstorming in the tight end room, like, ‘What can we do? I think we can pop up and down.’” Ferguson explained. “I was like, ‘What about if all three of us are in there, we just play Whac-A-Mole?’ Because we knew Peyton had that play in for a couple of weeks, and we knew he was going to get in there and have an opportunity.”

That all four tight ends were on the field together made the moment even better. The celebration, of course, recalled a mid-December game in 2016 when running back Ezekiel Elliott leapt into the kettle after scoring on a run versus Tampa Bay. He drew a 15-yard penalty.

“I definitely have to give them their props,” Elliott said Thursday night of his teammates’ more elaborate sequel. “They topped me. They topped my kettle celebrations. I’m a little jealous they didn’t let me in on it. But I love those tight ends; we’ve got a hell of a tight end room. All four of them are playing great ball.”

In 2018, Elliott upped the ante by dropping $21 cash in the kettle after a Thanksgiving Day touchdown against Washington. Later in the same game, he picked up Prescott and deposited him in the bucket, too. He was flagged again and subsequently fined $13,369 by the league for unsportsmanlike conduct.

Thursday’s new kettle celebration wasn’t flagged on the field. And the team’s leaders told the tight ends not to worry about any monetary punishments that may be levied.

“It was great,” Prescott told reporters of the Whac-A-Mole stunt. “The guys told me about it earlier in the week. They were worried about getting fined or getting a penalty. We said, ‘Make sure you are up to two touchdowns. We have a couple of guys that can help with the fines, so go for it.’”