CJ Stroud, Anthony Richardson Lead Six QBs Off Board in Round 1 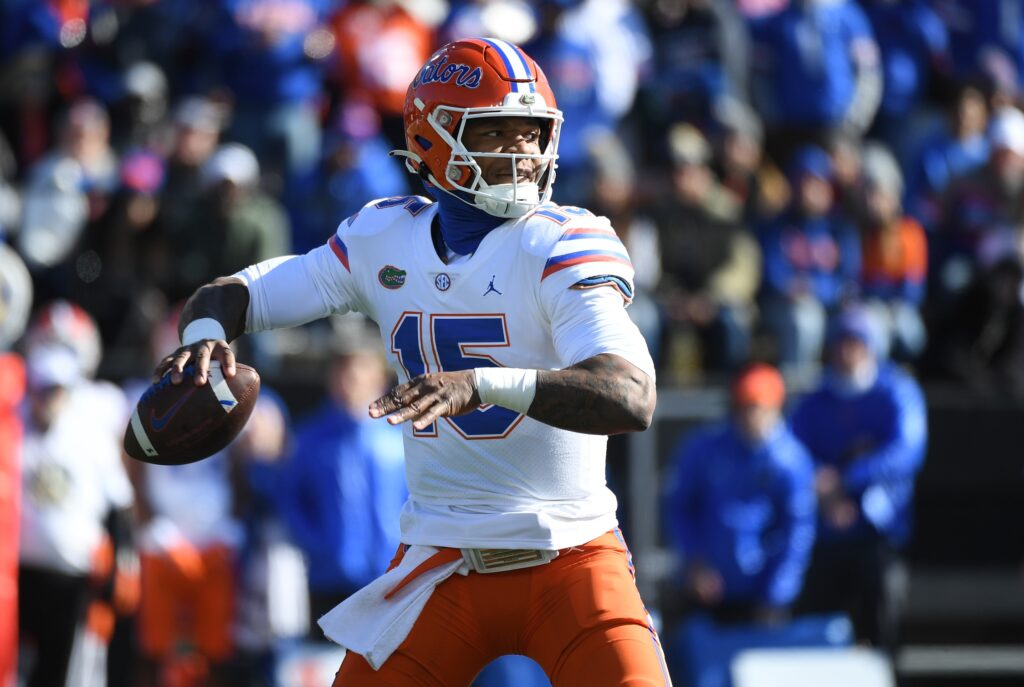 As November starts to wind to a close, more and more teams have their eyes on the 2023 NFL Draft. In this one-round 2023 NFL Mock Draft, we look at how the board could play out if the draft happened today.

Two quarterbacks kick off our latest 2023 NFL Mock Draft, but how does the board play out after that?

At this point, we can safely conclude that the Texans will be searching for a new solution at quarterback in the 2022 offseason. Set to have the No. 1 overall pick in this 2023 NFL Mock Draft, they’d benefit from taking CJ Stroud — a cerebral yet talented passer with accuracy, vision, and deadly distributive capabilities.

The merry-go-round has once again made its way back to Sam Darnold after stopping previously on PJ Walker and Baker Mayfield. But none of these QBs will start for Carolina in 2022. The Panthers need to reinvest, and Anthony Richardson provides a near-generational physical skill set to reinvest in.

Justin Fields has shown promising growth over the course of 2022. With that in mind, it’s time to strengthen the roster around him. The Bears have prospective needs at tackle, defensive tackle, and edge rusher, with good value options at all spots. But one could argue Jalen Carter is the best player available, and interior pressure is king on defense.

Will Anderson Jr. is always mocked as the first EDGE off the board — but what if he isn’t? Tyree Wilson isn’t as developed yet, but he’s a rare specimen at 6’6″, 275 pounds with near-36″ arms. His power element is similar to Patriots’ Deatrich Wise — with whom Josh McDaniels is familiar.

The Seahawks have done an admirable job coaching their roster up across the board, but they could still use more high-level talent on the edge. Playing from a two-point stance, Will Anderson Jr. could wreak havoc in Seattle’s defense with his athleticism, violence, and relentless pursuit ability.

In the last months of the 2023 NFL Draft process, the eye test sometimes takes on added weight. We’ve seen it before.

That might push Bryce Young down past other more prototypical QBs, but he should still earn an early selection for his franchise upside. The Lions would benefit from his toughness and elite creative capacity.

Stroud lifts the Houston offense up by himself, but the Texans will also need to add more talent to adequately support him. With Quentin JohnstonStroud gets a unicorn-level talent at the WR position — a 6’4″, 215-pound three-level cheat code with the catching instincts, RAC ability, and separation potential to be a true game-breaker.

Neither Dan Moore Jr. Nor Chukwuma Okorafor has distinguished himself as a long-term fix at tackle for the Steelers. If they have their pick of the tackle group in the 2023 NFL Draft, it’ll be hard to pass up Olumuyiwa Fashanu. Fashanu is PFN’s OT1 — a rare blend of athleticism, strength, power, and refinement at just 19 years old.

The Jaguars’ roster might be better than the team’s record would insinuate. But that doesn’t mean there are areas where more depth and talent can be added. Especially on the interior, there’s room for a dynamic pass-rushing presence Bryan Bresee to make an impact. And he has the explosiveness, lateral agility, and power to do so.

The Eagles are still scheduled to potentially lose a lot of talent on the edge this offseason, making scouting the 2023 NFL Draft EDGE class a heightened priority. With their top-10 selection, Myles Murphy is a difficult prospect to pass on if he’s there. He’s a 6’5″, 275-pound menace with terrific composite power and short-area athleticism.

The Cardinals are a mess — quickly devolving into an abstract painting that lacks meaning or direction. In these situations of total hopeless ambiguity, it doesn’t hurt to start with a high-priority position like edge rusher. Jared Verse‘s high-end athleticism, bend, and impressive hand usage should earn him confidence this high on the board.

There are a lot of long-term questions the Packers will need to answer. One of them could be a quarterback. But regardless of how the Aaron Rodgers saga plays out, they may need to ponder a succession plan for David Bakhtiari as well. Paris Johnson Jr. gives them the athleticism, power, and length they need to forge a high-level starter.

Cornerback is another position that will likely need an additional influx of talent for the Lions this coming offseason. Christian Gonzalez came into the 2022 season relatively raw, but he’s since built on his natural foundation. He has the smooth athleticism, length, and high-end playmaking ability to be the first CB off the board in this 2023 NFL Mock Draft.

Medicals will be big for Michael Penix Jr. He has two ACL tears and four total season-ending injuries on his record. Those medicals could push him far past his intended range. But if things check out, he has the talent to go this high, and a team like the Colts could use his arm, vision, and calculated gunslinger style.

Marcus Mariota is the definition of middle, and the Falcons haven’t been overly eager to give third-round rookie Desmond Ridder a chance. The Falcons are in a position to select a QB in this 2023 NFL Mock Draft if one falls to them.

Will Lewisin particular, fits their preferences as an athletic 6’4″, 230-pound signal-caller with a rocket arm.

All season, we’ve heard how much the Chargers’ offense needs more speed to spread things out and take pressure off other weapons. With Jordan Addison, they get that and more in this 2023 NFL Mock Draft. Addison is dynamic, but he’s also a slippery RAC threat, an instinctive receiver, and a dangerous separator in the short ranges.

I’d caution the Commanders against selling themselves on Taylor Heinicke long-term, but he has earned a degree of confidence in the locker room. Whoever plays QB for Washington in the future, they’ll need an improved interior. O’Cyrus Torrence can wall defenders off with his power, strength, and 6’6″, 330-pound frame.

It’s admirable for teams to see investments through at QB, but it’s nearing time to take the “L” on Zach Wilson. If they’re fairly certain he’s not the guy, the Jets have too much talent to waste another year deciding. Bo Nix is a first-round sleeper with all of Wilson’s talent but far more accuracy, toughness, and composure off-script.

Scheduled to have an excess of cornerback talent hitting free agency, the Buccaneers will need to restock at one of the most important positions on defense. Adding Kelee Ringo — a 6’2″, 210-pound talent with speed and fluidity — helps immensely with that. With more refinement, Ringo can be one of the best CBs in the NFL.

Moving Baron Browning to the edge was a creative move from the new Broncos staff, but it also took away a promising young player from a position that now remains a need. Denver stands to add more talent at the second level, and that’s what they get with Noah Sewell — a rare size/speed athlete with playing strength and physicality.

We’re still letting Geno Smith cook, and why not? The Seahawks’ starter has been one of the best QBs in the NFL this season. He has two quality receivers up top and a dynamic rookie running back, but Michael Mayer provides him with a high-quality safety blanket at TE in this 2023 NFL Mock Draft.

The scheme hasn’t helped Mac Jones in 2022, but the Patriots’ blocking has also been suspect at times, especially from the tackle spot. Luckily for New England, there will be an opportunity to benefit from a strong OT class this coming April. Peter Skoronski might be one of the most stable options still on the board.

Clark Phillips III doesn’t have the same length that other cornerback options do in this 2023 NFL Mock Draft. Nevertheless, he may be one of the best all-around prospects in the 2023 NFL Draft, despite his size.

Explosive, fluid, twitchy but hyper-alert, quick to process, and aggressive — he can ball out in the slot or on the boundary.

Bijan Robinson can’t fall out of Round 1. It’s just not possible for a player of his caliber. We know it’s not safe to speak in absolutes — especially with running backs. But you rarely come across an RB prospect like Robinson. He can take the Bills’ offense to the next level, giving them a star in the ground game alongside Josh Allen.

Wide receiver has been an area of ​​concern for a while in Baltimore. But this season, it’s been compounded by the injuries that have surfaced. Adding a versatile weapon like Josh Downs could improve this unit’s depth, dynamic ability, and flexibility all in one fell swoop. He can be used in motion but also makes traditional WR plays downfield.

Assuming Taylor Lewan’s time in Tennessee is nearing its conclusion, the Titans will have a massive void to fill at left tackle. At 6’4″, 315 pounds, with supreme proportional length, former five-star recruit Broderick Jones has the talent to carry the torch. He still has room for improvement as a pass blocker, but he’s a road grader in the running game.

It hasn’t been the ground-breaking season many hoped for Kayshon Boutte. But he’s still talented enough to field early-round interest if he does declare in 2023. The Cowboys feel like the type of team to take a risk on Boutte in that range. He’s flashed against quality competition, and his build isn’t dissimilar to former Cowboys star Amari Cooper.

I’ve mocked Rashee Rice to the Giants before. I don’t like to be too repetitive in these 2023 NFL Mock Drafts, but Rice just feels like such a good fit — both for what the Giants need and how they can use him. He’s an alpha WR1 with elite catching instincts and competitive toughness. But he also offers a dynamic RAC element that fits Brian Daboll’s scheme.

This is more of a move for the future, but at this point in this 2023 NFL Mock Draft, it makes sense for the Vikings to capitalize on the value. Danielle Hunter and Za’Darius Smith are both getting older. And having a young, high-upside talent like Isaiah Foskey in the wings behind them could bring massive dividends down the line.

After Fashanu, Jones, Johnson, and Skoronski, it’s a bit of a toss-up as to who will be the fifth OT to crack Round 1. Matthew Bergeron is a candidate with his athleticism, size, and left/right versatility. He still has room for refinement in his game — both with his hand usage and footwork — but his tools might be worth banking on at this spot.

This is a value addition for the Eagles, who get a hyper-versatile defensive piece at the second level. Trenton Simpson could stand to improve his playing strength at the next level, but he’s an absolute queen on the chess board. He has the athleticism, range, and football IQ to do whatever a defense needs.