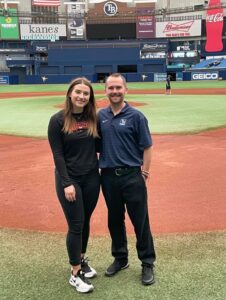 By Wendi Reardon Price
Clarkston News Sports Writer
Nicholas Cowan didn’t have a plan when he moved to Florida, but now he is a Visiting Clubhouse Assistant for the Tampa Bay Rays Major League Baseball organization.
Cowan, a 2009 Clarkston High School graduate, shared that when he moved to Tampa, Fla., from his hometown 11 years ago, he Googled sports jobs.
“They had two bat boy openings,” he shared. “I went there not thinking I would get the job. I had an interview, saw the stadium, worked a few spring training games and then I got one of the bat boy jobs on the visiting side.”
He added it was just random.
“I was 20 years old. I had no idea what I wanted to do with my life,” Cowan shared. “It just seemed like something that would be cool to work in the ball park and be around baseball.”
Cowan grew up around baseball. He started with T-Ball and finished playing with Clarkston Varsity Baseball when he graduated.
“The one thing I knew I liked was the direction of work into the baseball industry,” he said.
Cowan was the visiting clubhouse ball/bat boy for seven years and the experience was memorable.
“I have met every single hero I ever watched growing up,” he said. “Working on the visiting side you get to know every single player on every single team. Opening Day for us was with the New York Yankees and the first person to walk through the door was Derek Jeter. I am like ‘Wow – we are here.’ You have to be professional at the same time. Moved to Florida when I am 20 years old and all of a sudden I am here.”

He added it was interesting because the year before he started working for the Rays, he had standing room-only tickets for a Detroit Tigers playoff game.
“I remember thinking I can’t even go to a regular baseball game ever again. It can’t get better than this,” Cowan said. “Then, the next opening day in 2012, I was sitting in the bullpen with the New York Yankees.”

Cowan shared he got pretty good at the position and sometimes can be seen on ESPN’s “SportsCenter.”
“It was really cool because all of my family back in Michigan would turn on the TV and see me,” he said.
During the middle of his seventh season, he was offered a promotion to his current position.
“The guy who runs our food room and lounge got a promotion. I was offered the job. It is a whole different perspective,” Cowan said. “I am not on the field. You get to have more intimate relationships and get to know players in a different way which is really cool.”
He shared there are six people in their clubhouse taking care of an entire MLB team.
“We are there working as soon as the team lands which could be 4 am or 5 am,” he said. “We are there unpacking the equipment. We come back and we have everything set up for the entire day. All the players have to focus on is playing. We have food covered. We have laundry covered. We have their errands run.
“It’s an interesting world that goes on in the clubhouse. I work about 80-100 hours a week. You get into a good flow especially this point of the season, you have your routine set. There are a lot of hard working people in the clubhouse.”
He added there are a lot of memories over the last 11 years including the different time when COVID began in 2020 and no fans were in the ballparks.
But what stands out the most have been the relationships he has made.
One relationship is with Alex Moses, a Lake Orion graduate he met while working for the Pittsburgh Pirates during spring training.
“She was a dietitian for the Pirates. We got to know each other,” Cowan said. “We had no idea we grew up next to each other. She is now overseeing all the league meal preparations for the Baltimore Orioles, and she travels with them. It was funny when I saw her on Facebook and she went to Lake Orion and I went to Clarkston.”

During the summer, he was nominated to work in the 2023 World Baseball Classic, a tournament set to be played in Japan, Taiwan, and the United States.
“It is pretty cool,” he said. “My boss helps oversee it. He asked me to work for the World Baseball Classic. It’s wild to think about from a simple Google search of Tampa sports jobs 11 years ago that I could be working an international baseball tournament and possibly working in Japan for a month next spring. It’s pretty wild.”
No matter where he travels, Cowan said coming home is always special.
“When I come back to Clarkston, I see everything in flashbacks – trying to make it in high school baseball and always having a dream for baseball,” he said. “My parents and brother are amazingly supportive. Now to be around the greatest athletes in the world is really cool. Every time I come back to Clarkston, it’s a nice memory. Without my mom signing me up for T-Ball, my dad sponsoring the team, and my grandfather who was a really good baseball player, I wouldn’t have had this passion.
“It’s interesting to think you make a little bit of a difference in a Major League Baseball game, but I always seem to forget that until I get back to Clarkston.”