Chargers vs. Jaguars matchups, how to watch and prediction 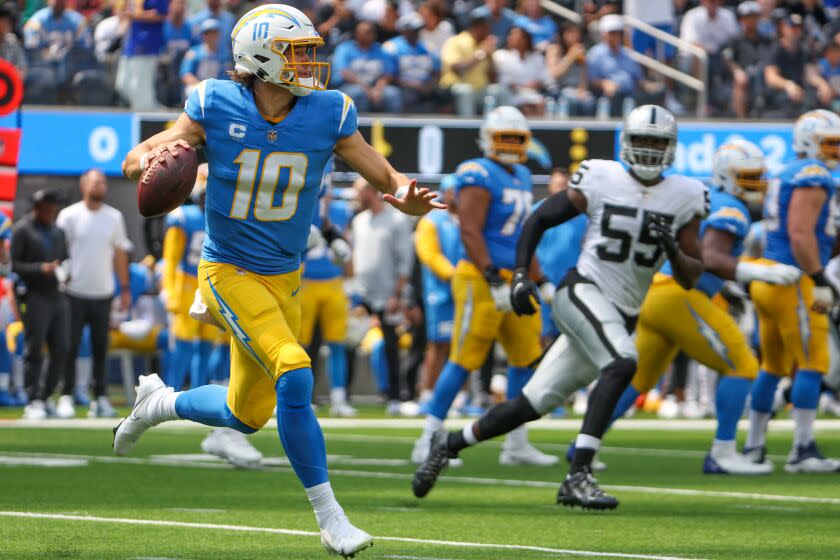 Breaking down how the Chargers (1-1) and the Jacksonville Jaguars (1-1) match up heading into their game at 1:05 pm PDT Sunday at SoFi Stadium in Inglewood. The game will be shown on CBS and streamed on Paramount+ and NFL+.

When Chargers have the ball: The tenor of this block of text is entirely dependent on the availability of Justin Herbert. The Chargers’ Pro Bowl quarterback is officially questionable because of fractured rib cartilage. The Chargers went from seven-point favorites Thursday to three-point favorites Friday after it was reported that Herbert wasn’t throwing in practice. The Chargers’ potential offensive issues aren’t limited to Herbert’s uncertain status. Pro Bowl center Corey Linsley (knee) is doubtful and Pro Bowl wide receiver Keenan Allen (hamstring) has a “50-50” chance of being ready, coach Brandon Staley said. Starting right tackle Trey Pipkins III (foot) is also questionable. If Herbert can’t play, veteran backup Chase Daniel will start, Staley said. Whoever is at quarterback, the Chargers’ plan will probably include an emphasis on shorter, quicker passes. That approach would limit Herbert’s vulnerability or take advantage of what Daniel is likely going to be most comfortable doing. The Chargers also could try to turn to a running game that has lacked consistency. They are tied for 28th in the league with a per-game pace of 75.5 yards rushing and have averaged only 2.7 yards in 55 carries. A possible problem: Jacksonville’s front seven is considered a strength. The Jaguars rank third in rushing defense.

When Jaguars have the ball: When these teams most recently met — on Oct. 25, 2020 — Jacksonville’s quarterback was Gardner Minshew II. The Chargers opened an early 16-0 lead that day at SoFi Stadium, fell behind in the third quarter and came back for a 39-29 win. That same weekend, Trevor Lawrence threw for 289 yards and two touchdowns to lead Clemson to a win over Syracuse. On Sunday, Lawrence, the top overall pick of the 2021 draft, will make his first appearance against the Chargers. He threw for 510 yards and three touchdowns with one interception as the Jaguars split their two games to open the season. “This guy was as good as it gets in college football,” Staley said. “… I think that they have done a nice job of building the offense around him.” Jacksonville’s record-setting offseason spending spree included signing receiver Christian Kirk to a four-year deal worth up to $72 million. The Jaguars also added right guard Brandon Scherff, tight end Evan Engram and wide receiver Zay Jones. Lawrence and the offense haven’t blossomed yet, but most NFL observers agree Jacksonville is heading in the right direction after a season of turmoil.

When they kick: The Chargers’ Dustin Hopkins has made all six of his extra-point attempts and two of three field-goal attempts. His miss came from 49 yards against Las Vegas in Week 1. Jacksonville’s kicker is Riley Patterson, who spent time with Detroit last year and is in his second NFL season. Patterson is four for four on extra points and four for five on field-goal attempts with a long of 52 yards.

Jeff Miller’s prediction: Even if Herbert doesn’t play, the Chargers appear to be the better team. But don’t discount the absence of Linsley, if he’s out. Depending on who plays, this certainly could be a struggle.