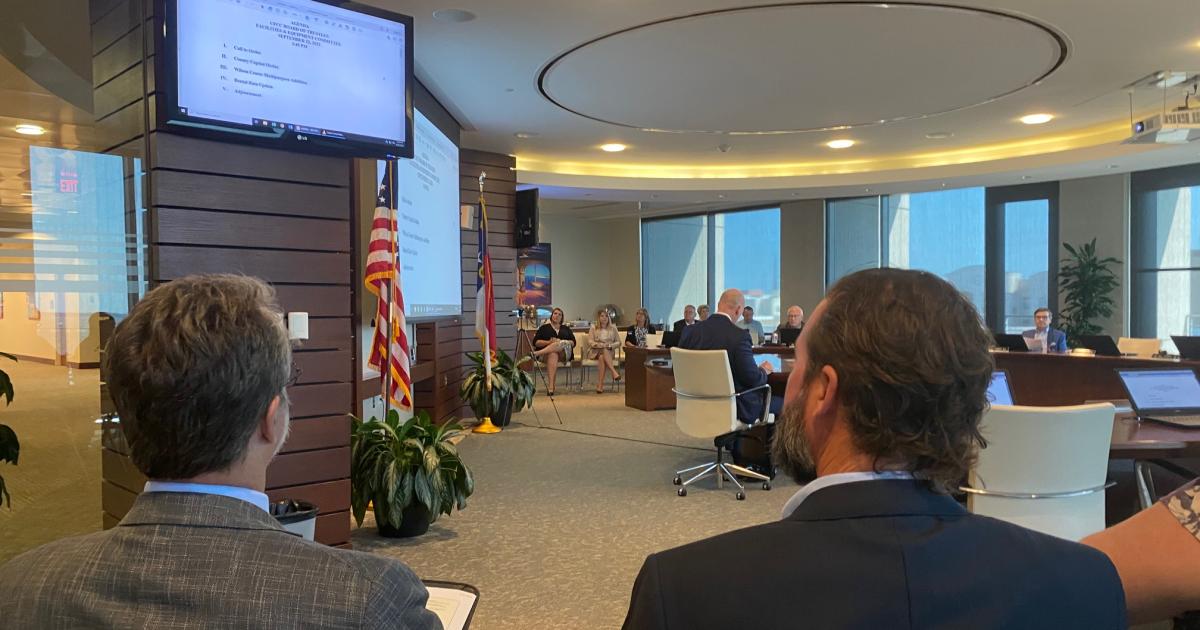 This was also the first meeting post-WHQR’s three-part series on major issues occurring at the college, including possibly misusing state funds on contract buyouts, dissolving the FTE compliance departmentand the accounts of two former program directors who left the college this spring.

Trustees, excluding Jimmy Hopkins, who was absent, did not discuss the reporting during the meeting.

CFCC President Jim Morton did not address any of these concerns in his President’s Report nor did Chair Bill Cherry who said his chair’s report was “skinny this month.” The only item for Cherry was for the board to do their mandatory ethics training. After Morton finished his report, Cherry said, “Great job.”

Funderburk asked Morton on two occasions during the meeting what happened with changing of the compensatory leave policy for the crew of CFCC’s research vessel the Cape Hatteras. Essentially, the ship’s captain resigned over not being allowed to take compensation time after working overtime out at sea.

“I was on vacation in California and when I came home, I saw there had been some issues about the marine science program, and I read some reports in the media, and I didn’t hear anything from us. […] It happened at the beginning of the semester, it put questions in students’ minds about the ship going back out to sea, and obviously, they were upset with it. I would have liked to have seen more communication with that,” said Funderburk.

Morton responded, “we have number one programs and all. And that is something that typically, we have an issue all the time when we have an instructor, for example, a welding instructor quit right before classes were about to start and we had to cancel five classes.”

Funderburk again tried to get Morton to answer the question of why this had happened in the first place.

“The issue was about being legally compliant. We tried to make a move to not use the term, ‘comp time.’ ‘Comp time’ has legal tentacles to it,” said Morton.

“I understand that, but I would really like to have seen a really clear explanation of what happened,” said Funderburk.

Earlier during the committee meeting on this issue, Morton said, “There was misinformation out there,” but did not elaborate on what that was. He also said they are now in compliance because, in the employee handbook, they have now changed the term ‘comp time’ to ‘sea time’.

In an interview with WHQR, Funderburk said it’s still not clear what happened.

“What I’d like to know is, the genesis of the decision. Why did they decide to make a change? What were the rules and laws that affected the people on the boat – and why did they do it at that time? It seems to me that they [the college] made a decision; the decision was contested not only by the crew who resigned but by the students who were very upset as it seemed – and then they reversed the decision,” said Funderburk.

Maggie Oxendine, a marine technology student and president of the marine tech club, said she was dissatisfied with the explanation Morton gave.

“I felt like the questions Mr. Funderburk were asking were straightforward and open and should have been easy to answer but I just felt a lot of deflection from Mr. Morton, so no, we don’t have those answers,” said Oxendine.

About 15 of Oxendine’s marine tech classmates joined her at the Thursday meeting.

After the meeting, she added that she had a tense exchange with the Executive Director of the President’s Office, Michelle Lee, who is also the board liaison.

Oxendine said she went up to Funderburk to thank him for asking those questions of Morton.

“And as I was speaking with him, Michelle Lee came up and interrupted and said she has answers to those questions, so I asked her, ‘why has the policy changed; where can you point me to?’, She said, ‘FLSA – it’s federal‘. I understand I grasp that — ‘Where’s the paperwork? Point me to the policy number.’ She couldn’t. She wouldn’t do it. She deflected as well so I had to walk away from speaking with her – it got so kind of tense and heated,” said Oxendine.

Waiting on public records for clarity

In order to understand this decision-making process, on September 2 WHQR put in a public records request for all emails sent between the following CFCC employees: Jason Rogers (chair of the marine technology department), Anne Smith (vice president of human resources) , Mark Council (dean of career and technical education), and John Downing (vice president of economic and workforce development), between August 8 until September 2.

The college has yet to fill the request.

But CFCC has told WHQR that the HR compensation study that was done to support the change in policy, the one mentioned by Downing to marine tech students in a meeting on August 30does not exist.

On Friday, September 23, in an email sent by Rogers to the marine tech students, he said, “Scientific Technician Bill Davis has withdrawn his resignation and will remain in his current position. […] This change in policy by the college would NOT have happened without the amazing response of our currently enrolled students. Not only did they make their voices heard but rallied many of our employers and graduates to reach out to administrators.”

But for Oxendine, the fact remains that Captain Robert Daniels is still not returning.

“Yea, our captain is still gone. We still don’t have a captain. I understand Mr. Rogers is looking and I trust his judgment more than anybody, but if this didn’t have to happen like Captain Bobby would still be here — and I respect that man a lot,” said Oxendine.

Funderburk agrees. While the college is currently looking for the captain’s replacement, they cannot return to the Hatteras until that position is filled.

“When I was on my trustees’ tour, I was very impressed with the Hatteras. What we heard about the Hatteras, was that it made students better than any other available on the coast, and the Hatteras was the main thing. And now the Hatteras can’t be used. And they have to use a smaller boat [the Martech]which as I understand, can’t do the same things the Hatteras can,” said Funderburk.

Another point of discussion during the meeting, Dr. Eric Brandon, the president of the Faculty Association, said, “Faculty salary increases since 2008 have not, on average, kept pace with the rate of inflation. Furthermore, I stressed that without significant salary increases directly from the state of North Carolina, it could become difficult to both recruit and retain faculty at CFCC and across the entire North Carolina Community College system.”

Brandon said that the faculty received a 3.5% salary increase from the state this year, and received a 2.5% increase last year. And before that, he said, they barely received any state raises.

Funderburk asked what percentage increase they would need to keep pace with inflation.

There were discussions about needing anywhere from a 10% to 20% increase to keep people in the community college teaching profession.

Morton himself has received two 10% raises over a span of two years.

The trustees then started talking about what could be done to improve the situation. Morton said he and Cherry had gone to visit state legislators in Raleigh to advocate for higher salaries. Trustee Jonathan Barfield is a county commissioner, as is Trustee Bill Rivenbark. They said they are looking mainly to the state to increase these salaries.