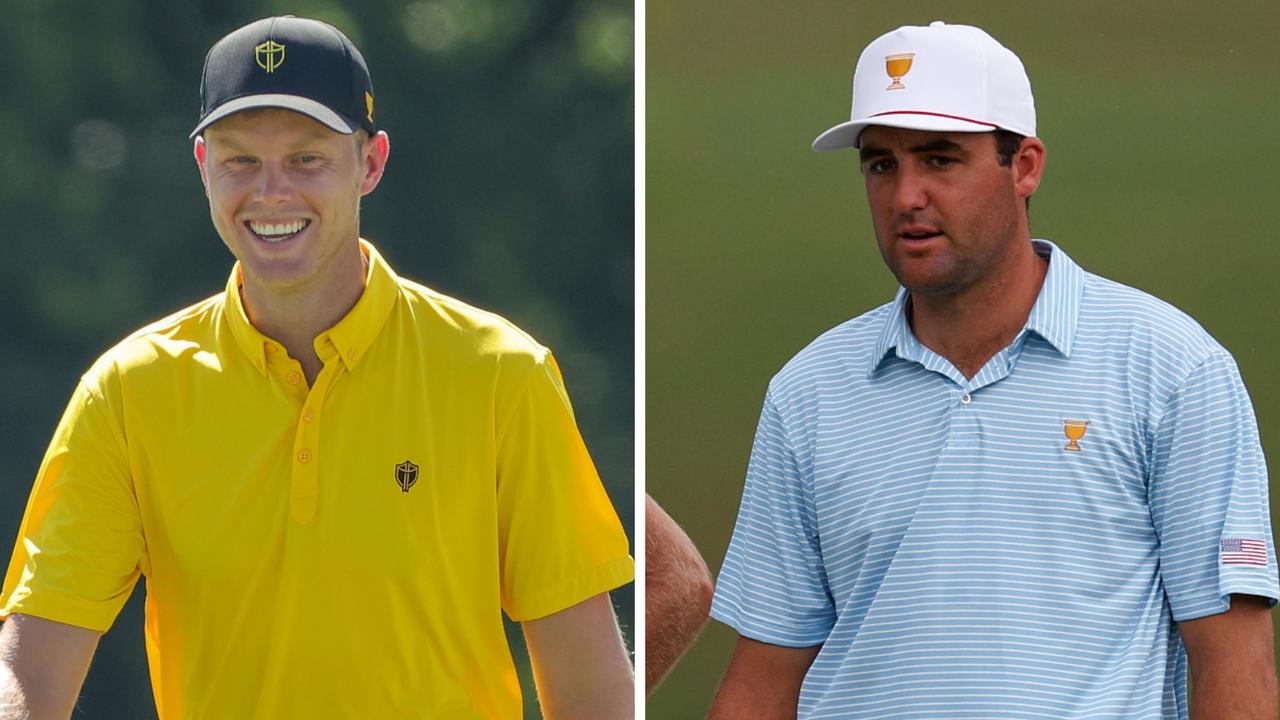 The Internationals rescued themselves from a major disaster on day one of the Presidents Cup, rallying late to stop an American cleansweep in the foursomes.

Team USA was leading all five matches at North Carolina’s Quail Hollow, but a stunning comeback from Australia’s Cameron Davis and Si Woo Kim limited the damage to 4-1.

Presidents Cup rookie Davis and Kim were three-down against world No.1 Scottie Scheffler and No.12 Sam Burns but went on to win two-up, with the Australian’s iron play a standout.

The Internationals pairing came alive late, winning each of the final four holes to pull off one of the tournament’s great upsets.

Davis is ranked 66th in the world and has one win on the PGA Tour, while Kim is ranked 76th with three career victories — the same amount Burns claimed in this season alone.

Meanwhile, it is the first time the world No.1 has lost his opening Presidents Cup match since 2005, when Adam Scott and Retief Goosen beat Tiger Woods and Fred Couples, according to statistician Justin Ray.

Watch every round of The President’s Cup LIVE with Fox Sports on Kayo 20th – 26th Sep. New to Kayo? Start your free trial now >

Earlier, Adam Scott and Hideki Matsuyama were crushed 6&5 by Patrick Cantlay and Xander Schauffele in the opening match, which looked to set the tone for the day.

Scott and Matsuyama — the International’s strongest pairing on paper — had a nightmare start, losing four of the first seven holes.

The pair went on to win only a single hole for the entire round as Schauffele and Cantlay put their foot down on the back nine to claim a massive win on the 13th hole.

It looked like it would be a bloodbath for the Internationals as the hosts raced out to a lead in all five matches.

‘NOT HAPPENING’: Golf peace talks ‘off the table’ as bitter feud takes another dark turn

Jordan Spieth and Justin Thomas went on to beat Sungae Im and Corey Conners 2&1. Spieth is now 6-0 and foursomes matches at the Presidents Cup. Cameron Young and Collin Morikawa then downed Tom Kim and KH Lee by the same margin to make it a perfect 3-0 start for the United States.

Davis and Kim eventually stopped the bleeding for the Internationals for the team’s only point of the day.

Only a centimeter stopped the Internationals from gaining another half-point, but Taylor Pendrith and Mito Pereira suffered a heartbreaking loss on the 18th hole to Tony Finau and Max Homa.

In the closest match of the day, the teams were tied for five consecutive holes until Pereira cracked, pulling his drive on the 18th tee, while he also left a bunker shot well short.

That left Pendrith with a 10-foot putt for the tie, but he narrowly missed on the high side to give the Americans a 4-1 lead.

It was the 16th-consecutive foursomes session at the Presidents Cup that the United States have either won or tied.

Already facing a mountain to climb having been gutted by LIV Golf, the Internationals will need to pull off one of sport’s greatest ever comebacks to avoid losing a ninth straight Presidents Cup.

Five points will be on offer again on Saturday with fourballs taking place from 1.30am (AEST).