Blues’ Colton Parayko demoted to third pair: ‘He’s definitely not had the year that we expected’

ST. LOUIS — Ten minutes into Tuesday’s game, Blues defenseman Colton Parayko was a minus-3, and by the third period, he was a minus-4 and demoted to the third pair with rookie Tyler Tucker.

“Didn’t have a good game,” Blues coach Craig Berube said of Parayko. “Tentative. It seems like he’s a little bit tentative. Just not assertive enough with the puck.

“It’s not all the time, but he’s definitely not had the year that we expect him to have or he expects.”

Parayko wasn’t the only one at fault in the Blues’ 5-3 loss to Buffalo. But for an organization that has protected Parayko when he hasn’t played as heavy as his 6-feet-6, 228-pound frame, Berube’s words were heavy.

Going into Tuesday’s game, Parayko was a combined plus-70 in his eight-year NHL career with the Blues. After his minus-4 in a season-low 16:15 of ice time, he’s now a minus-19 this season.

“He’s played a lot of good hockey here over the years, so I’m sure he’s going to get back to that,” Berube said.

Parayko was involved in Buffalo’s first four goals, including two in the first 1:25 of the game and three in the opening 9:07.

The Blues continue to treat the defensive-zone slot area as a place they’re not allowed to skate in, and backdoor goals now seem to be a nightly occurrence.

On the Sabres’ first goal, former Blues forward Tage Thompson came off the bench and streaked into the offensive zone, splitting Parayko and Alexey Toropchenko. Tyler Pitlick stripped Thompson of the puck, but couldn’t clear the zone. The puck was loose near the net, and when Parayko couldn’t get his stick on it, the play continued and eventually Thompson was able to set up Jeff Skinner with a wide-open shot from the slot.

“We do a good job of breaking the play up in the slot,” Berube said. “We get a puck, we don’t get it out. They battle it and they make a play and it’s 1-0. It’s that quick. Tage Thompson coming off the bench.”

How can that happen?

“Generally, it’s probably not a great puck play because you get guys moving,” Blues defenseman Justin Faulk said. “If we get the puck on our stick, guys start leaving the middle, trying to get open so you can make a play. If there’s a turnover, the middle is usually what’s wide open.”

This time, Skinner had the puck behind the Blues’ net and was easily able to center the puck through Nick Leddy to the front of the net. With Brayden Schenn and Vladimir Tarasenko standing nearby, neither confronted the Sabres’ Alex Tuch, who waltzed right in for the goal.

“Same kind of thing: the slot is open,” Berube said. “We’re running to the outside and not stopping and just protecting that area where the puck is. The puck is behind the net, bad stick, no slot awareness by the winger or the centerman, 2-0.”

Buffalo didn’t need much more time to make it 3-0. Fortunately, it wasn’t another slot shot, but unfortunately, it was another one of the backdoor tap-ins the Blues have allowed this season.

They were chasing the Sabers around in the zone, and eventually, JJ Peterka was able to thread a pass through Parayko onto the stick of Owen Power, who had plenty of room to knock in the pass from Peterka because Robert Thomas was late to defend.

Here’s a screenshot of what Peterka saw, and how Power gained inside position on Thomas… 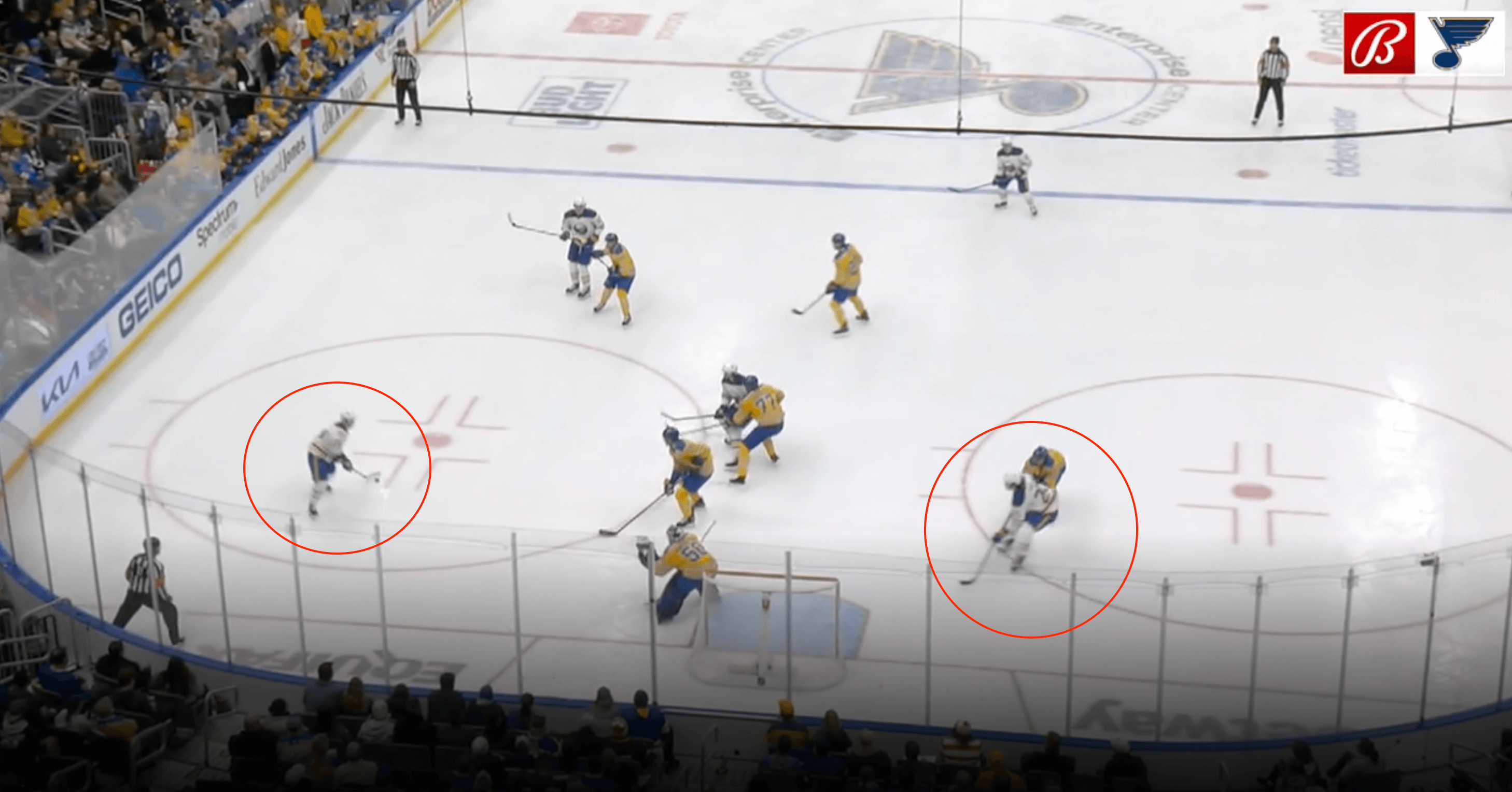 “Our slot was just wide open,” Blues defenseman Torey Krug said. “They could’ve just camped out there, and the puck would end up on their stick and put Binner in a bad spot multiple times. We’ve got to take better care of our house.”

Thompson gave Buffalo a 4-0 lead early in the second period, but the Blues did make a game of it. Schenn, Ivan Barbashev and Jordan Kyrou scored for a 4-3 deficit, but even with a 6-on-4 advantage, the Sabers put it away with an empty-netter.

“I know we showed some fight, but when points are at a premium, we just can’t put ourselves in that position,” Krug said.

But the Blues did so again, and it continues to happen as a result of their wide-open slot. The Blues have allowed the seventh-most shots in the league from that area per 60 minutes (30.62), and the ninth-most slot goals per 60 (2.42).

The chart below from HockeyViz illustrates that a lot of their shots against come from the slot area in red, at an above-average rate relative to the rest of the league at five-on-five. 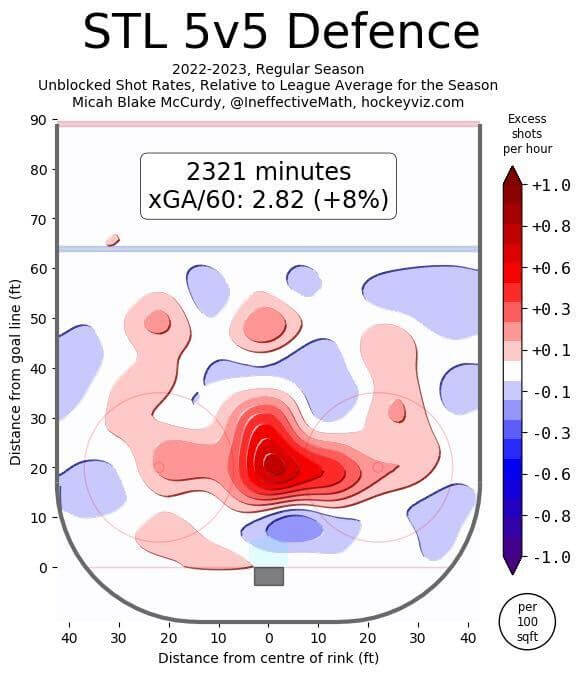 “Every team in the offensive zone, that’s what they want to do, try and create ways to get that puck in the slot,” Faulk said. “It’s the most dangerous area in the ice, and you’ve got to make tougher plays with the puck, or if you’re on the D side, stay tight to your man.”

Berube and players alike said Tuesday that they’ve been preaching that all season, but the problem still persists.

“Well, we just keep practicing and working on it,” Berube said. “Guys got to be more committed. I think there’s times we chase too much instead of just keeping them on the outside and having a little composure and protecting that slot area and waiting for a broken play, or a blocked shot. We’ve got to have more patience there and we really don’t.”