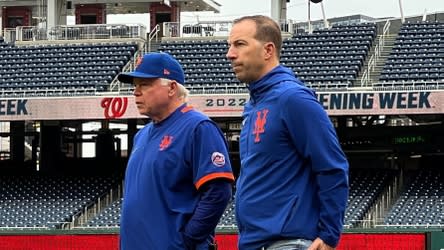 The Robinson Cano era in Flushing has officially come to an end.

The Mets released the veteran second baseman on Monday when all rosters across baseball were required to be trimmed to 26 players.

Despite Cano’s early season struggles, it still seems a difficult decision to cut a veteran presence from your roster. It was no easier for general manager Billy Eppler to make that decision.

“It was pretty difficult,” said Eppler. “Trying to process every player conversation I’ve ever had of that kind of magnitude. But with my history with Robbie, sharing a lot of experiences with him professionally, today was one of the more difficult ones. ”

Eppler and Cano’s relationship extends back to their days with the Yankees. Cano as their star second baseman and Eppler as assistant general manager to Brian Cashman.

The Mets early season success ultimately led to Cano’s release. There were too many quality bats that deserved to get their share of playing time. Cano was the odd man out.

“Given the construction of our roster and how the playing time was going to be allocated it put us in a position where we had to make some difficult decisions,” Eppler said. We were not going to have the plate appearances as we want to allocate them around and utilize the whole bench. ”

With a decision that would knowingly result in public attention, getting approval from the man in charge of the operation would likely be required.

Mets owner Steve Cohen and team president Sandy Alderson were in full support of Eppler making the decision to release Cano from this roster.

I walked through the transaction with Sandy (Alderson) and then ultimately with Steve (Cohen), and as we were kind of talking through the weekend and then yesterday a little bit before the game I wanted to make sure everyone was understanding of what the impact was.

“I passed along to him (Cohen) the recommendations of the baseball group and front office staff. I walked through some details with him (Cohen) and he said ‘make the baseball decision,’ “Eppler said.

The Mets GM added that he would not rule out bringing Cano back “in a different capacity.”

Speaking shortly after Eppler, Mets manager Buck Showalter discussed the decision to move on from Cano, calling it “emotional for all of us.” He said he fully expects Cano to be able to land a job elsewhere.

Asked why the Mets decided to DFA Cano, Showalter echoed much of what Eppler said.

“Just what was best for our club at this point with the staff,” Showalter said. “As we go forward, being able to get some people in the mix more consistently that we think are deserving [and can] continue to help us do some of the things we’re trying to do. “