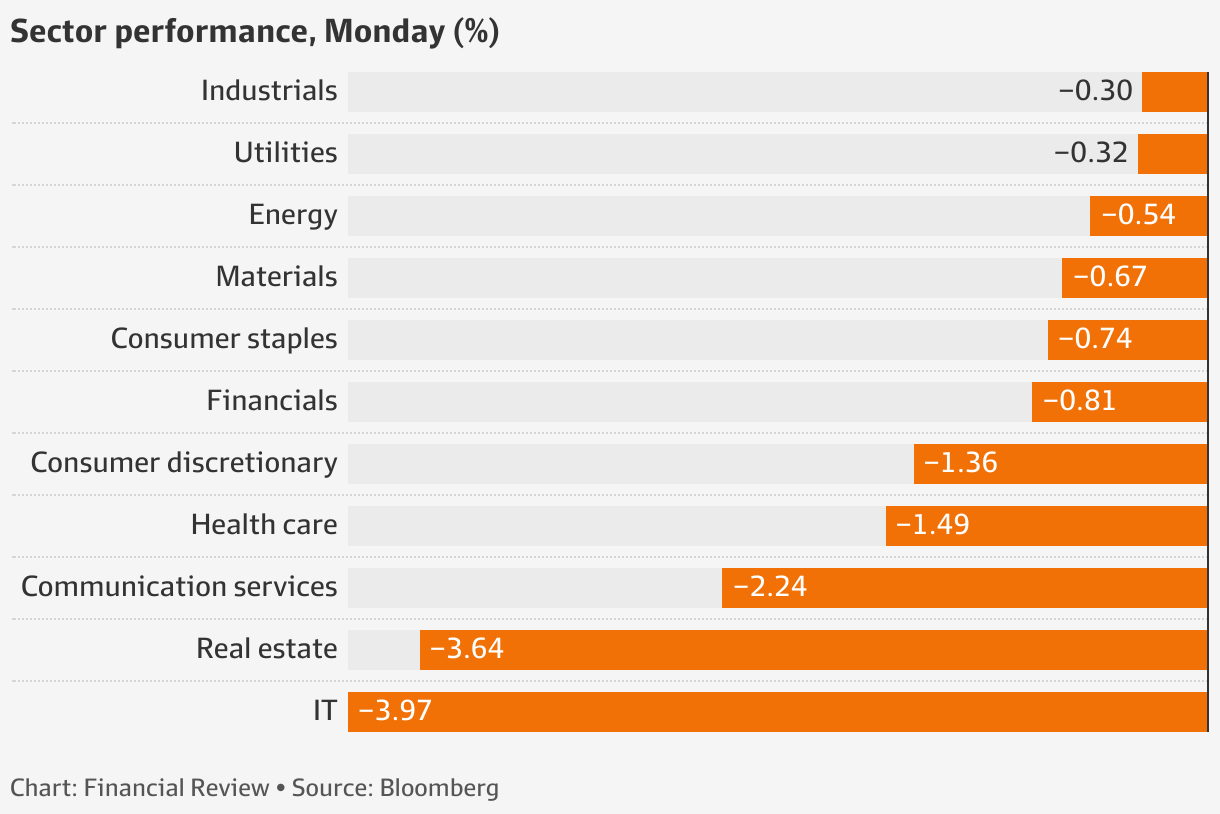 All 11 sectors on the S&P/ASX 200 fell. Tech stocks were the hardest-hit with a 4 per cent drop as expectations of aggressive monetary tightening by central banks rattled investors. Also undermining sentiment were concerns about slowing growth in China, Australia’s key trade partner.

Aussie Broadband dived 28.1 per cent to $4 in the largest daily loss after downgrading its full-year earnings guidance.

Biotech Imugene was the biggest index laggard with a 13.7 per cent drop to 19¢ after announcing the termination of its supply agreement with pharmaceutical company Merck & Co. 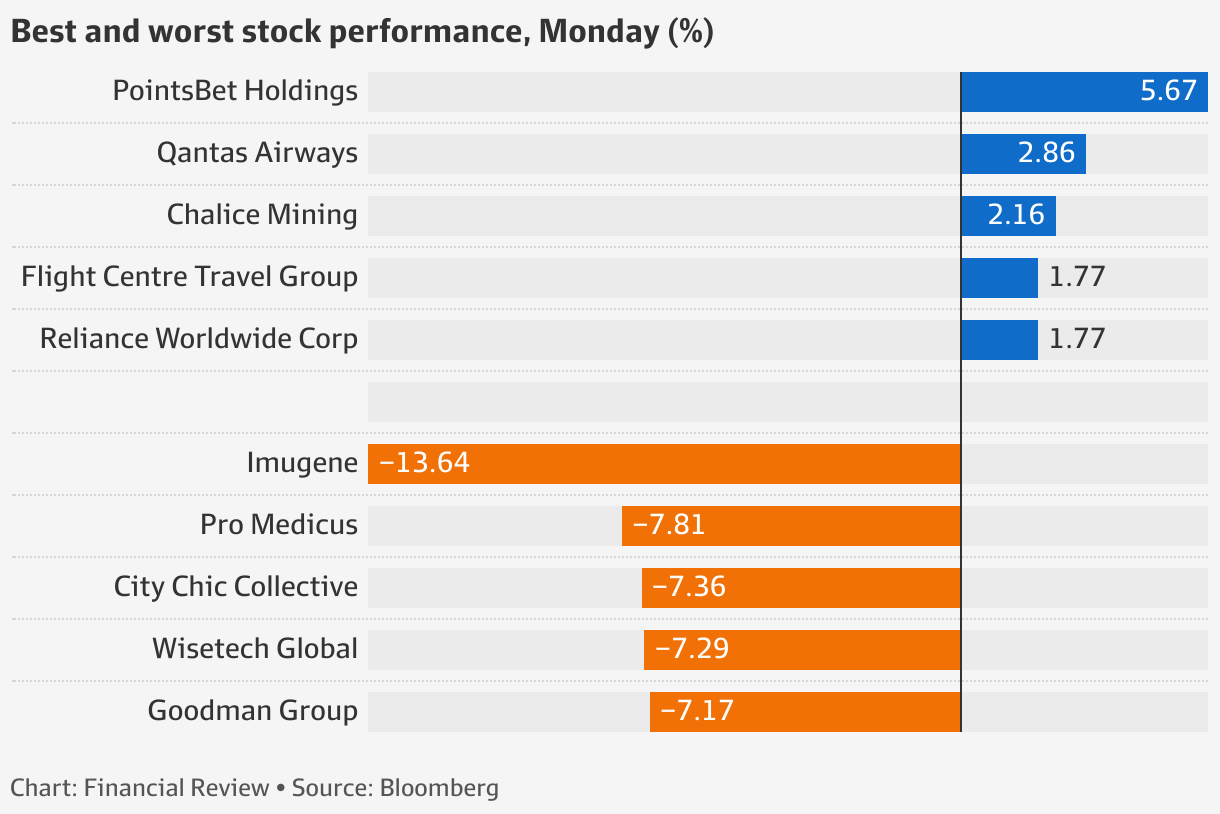 AGL Energy declined 0.7 per cent to $8.62 after advising of a $74 million hit to pre-tax profit from the breakdown of a unit at its Loy Yang A power station in Victoria. The revised earnings guidance fueled further concerns about the outlook for its coal power business ahead of a critical shareholder vote next month on its demerger.

Meanwhile, Qantas rose 2.9 per cent to $5.76 after flagging it will return to profitability next financial year as leisure and corporate travel markets roar back to life.

The resurgence has paved the way for the airline to order a dozen new Airbus A350-1000 jets to start non-stop, 19-hour flights from Sydney to London and Sydney to New York by the end of 2025.

The upbeat, third-quarter update predicted underlying earnings in the six months to June 30 would land between $450 million and $550 million, well ahead of analysts’ estimates.

Chalice Mining jumped 2.2 per cent to $7.1 after reporting strong results at its Julimar project in WA.

Helloworld Travel also had a good day, rising 2.7 per cent to $2.73 on improving travel demand following border reopenings. Total transaction value for January-March rose 60 per cent to $419 million from the year-earlier period. Based on retail, wholesale and inbound booking intakes in the first three months of 2022, the company forecasts a rapid improvement in revenues.

Liontown Resources dropped 2.1 per cent to $1.44 after completing negotiations with LG Energy Solutions and executing its first offtake agreement for the supply of spodumene concentrate from its flagship Kathleen Valley lithium project.

The agreement with South Korean-based LG includes the supply of up to 150,000 dry tonnes per annum of spodumene concentrate expected to start in 2024.

The financials sector shed 0.8 per cent with the majors mixed. NAB and Commonwealth Bank both dropped about 0.9 per cent, but ANZ and Westpac ended the session unchanged. 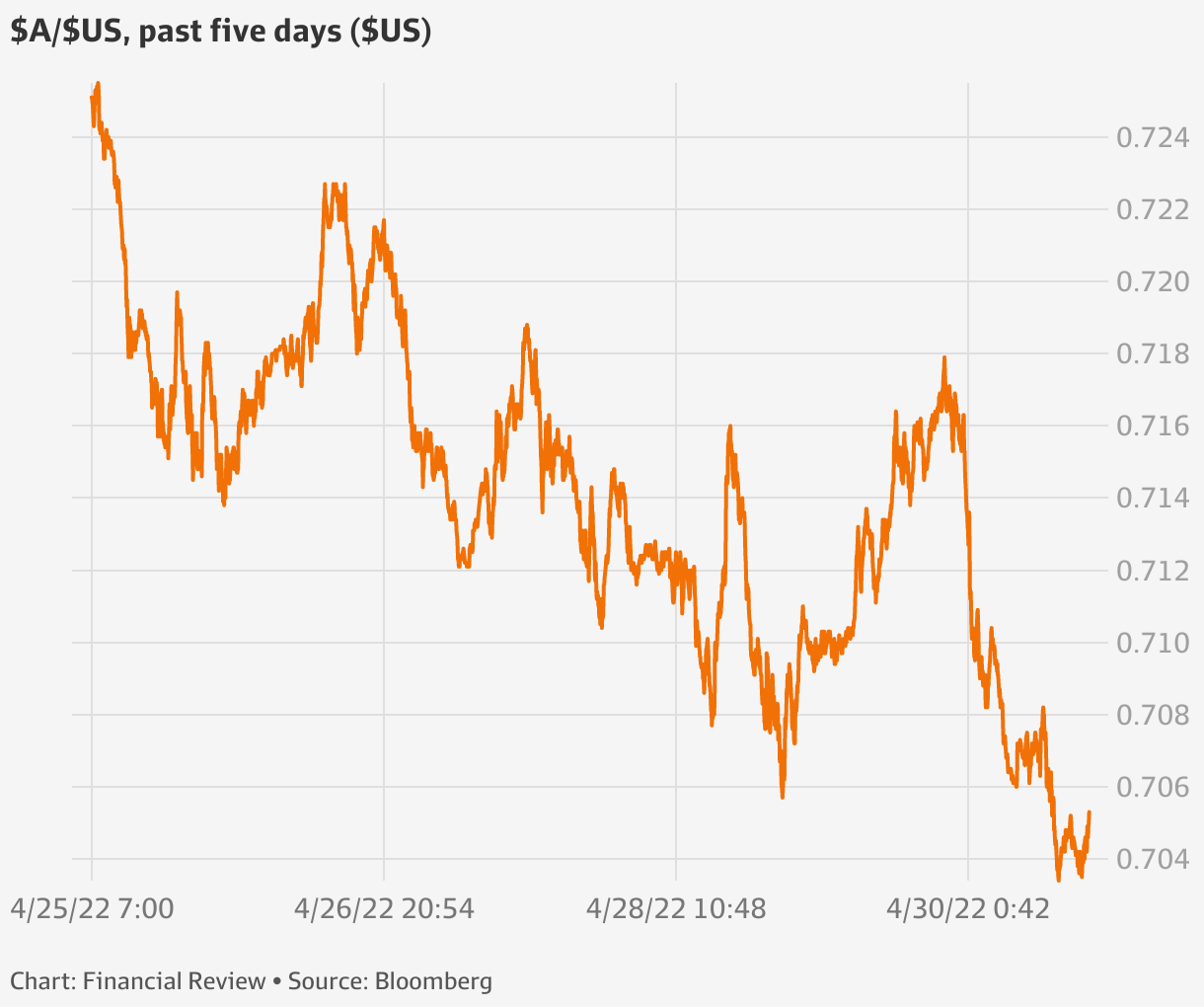