AJ Dillon has been another disappointment in the Packers disappointing season 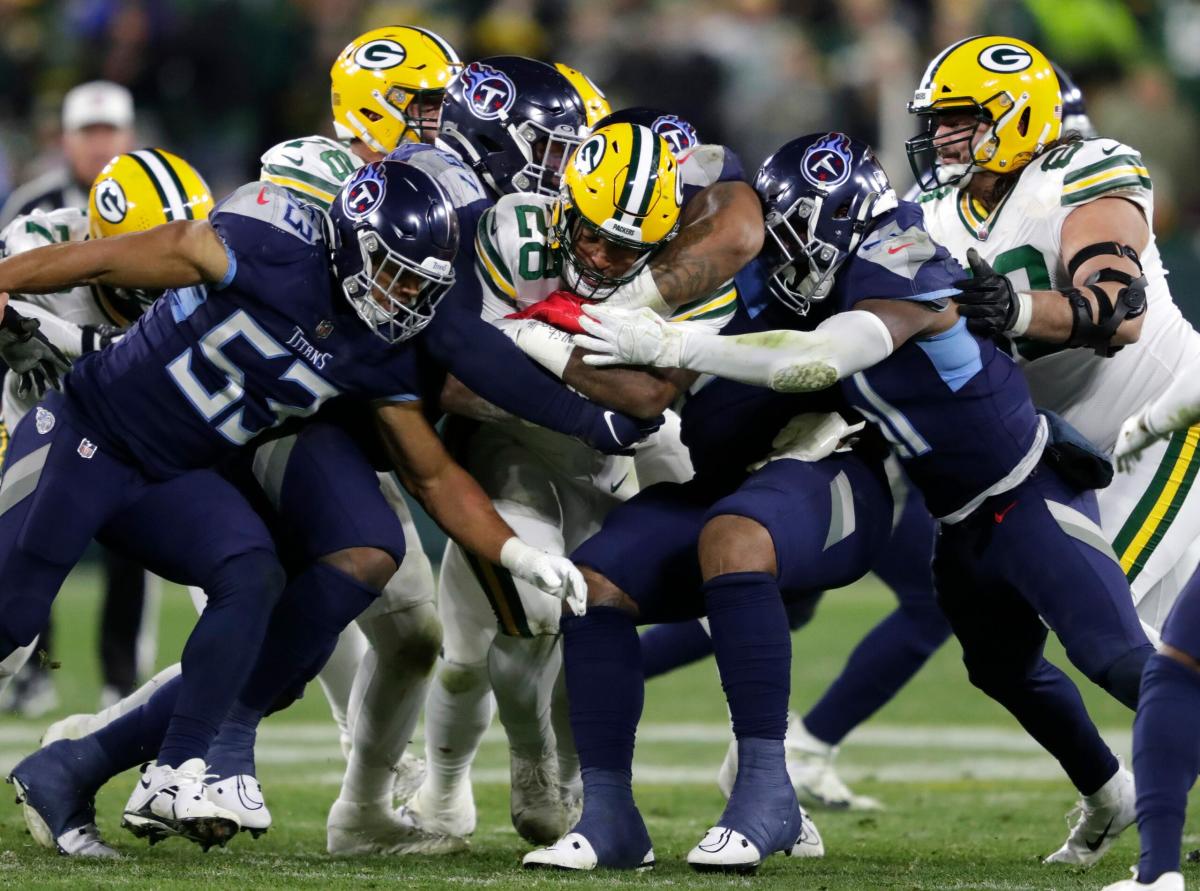 Six carries for 13 yards. That was AJ Dillon’s stat line in Green Bay’s latest loss to the Tennessee Titans. The Packers were hoping to see a jump from Dillon in Year 3, but instead, the 2022 season has been an utter disappointment for the former second-round pick.

During his first two years, Dillon had some good moments. No one will forget his two-touchdown, 124-yard performance against Tennessee as a rookie in snowy conditions at Lambeau Field, but the flashes of a dominant back built for the cold haven’t fulfilled his 62nd overall selection.

This season, Dillon’s bruising running style looks benign, if not clumsy, on his way to averaging a new career low of 4.0 yards per carry. According to Pro Football Focus, Dillon ranks 17th with 2.93 yards after contact among running backs with at least 100 rushing attempts. Plus, any wiggle he had in previous years has been absent in Dillon’s fall to 29th in PFF’s elusive rating, which measures the success and impact of a runner with the ball independent of his blocking.

And yes, Green Bay’s offensive line play has not been great. Injuries and inconsistency have plagued their unit all season, but the same can be said for last year when Dillon was more effective. In 2021, behind an offensive line missing two premier blockers in David Bakhtiari and Elgton Jenkins for most of the season and with multiple rookies starting, Dillon averaged 3.18 yards after contact and forced more missed tackles. Meanwhile, his elusive rating was nearly 25 points higher.

While Dillon has struggled to stay on his feet, one of his goals was to become a more complete back than a pass catcher. However, that has not come to fruition either. After being praised during the offseason for his strides in the passing game, Dillon’s four drops trail only two other running backs. Also, his 6.4 average yards per catch is 30th among running backs with at least 20 targets.

Adding salt to the wound, this was a season where the Packers needed their best players to step up more than ever. Aaron Rodgers included Dillon when he stated in training camp that the offense would need to have its 11 best players on the field. Even though Dillon has played a higher percentage of snaps than his previous two seasons, his production has regressed.

Looking back, it’s easy to question Green Bay’s selection of Dillon when it was somewhat confusing to begin with. Not only did they already have two stable running backs at the time, but few scouts deemed Dillon worthy of a second-rounder. Perhaps they were right about the limitations of a player whose tread may have already been wearing thin after maxing out at 845 carries in three seasons at Boston College.

Nevertheless, there is still time for Dillon to turn things around. He has six games and another season to improve his play and determine what his next contract will be worth when he eventually becomes a free agent in 2023. Unfortunately, through the first 11 weeks of this season, he has been yet another disappointment for a disappointing Packers team.