There’s never an ideal time to get fired, but Donald Hill-Eley figured he’d make the most of it.

In November 2021, he was let go as head coach of Alabama State, seven games into his sixth season. His son Ayinde “Ace” Eleywas about to wrap up his senior season as a linebacker at Georgia Tech, but had already decided to return for an additional year of eligibility in 2022.

Rather than chase another job and throw himself into a 33rd-straight fall of coaching at the college or pro level, Hill-Eley decided to move his family to Atlanta so he could watch all of Ace’s final season in person.

For two decades, Donald and Ace had lived a paradoxical life together, both bonded and kept apart by football. The interminable hours of a head coach, tending to hundreds of kids other than his own, had prevented Donald from taking a more involved role in his own son’s career.

“It was a situation where, as a coach, you just prepare that that’s part of the sacrifice,” he said.

He watched recordings of Ace’s games. He listened to his recaps of practice. He offered his wisdom over the phone. But it could only fulfill him so much.

Hill-Eley had missed out on too many moments, deprived himself of too many memories, fended off too many feelings of regret. Ace had one more season of college football left, and after all those years of sacrificing, he was determined to make up for lost time.

It turned into a more glorious fall than either of them could have imagined.

In early August, Eley was added to the Georgia Tech coaching staff as an offensive analyst. In October, he was elevated to Tech’s running backs coach, his first full-time assistant-coaching job at the Power-5 level. And he’s watched every one of Ace’s team-leading 107 tackles, a figure that ranks second in the ACC and has him contending for all-conference honors.

Ayinde Eley (2) is the first NCAA Division I FBS player since 2016 with 107 total tackles, 9.5 tackles for loss, 3.5 sacks, three forced fumbles and two fumble recoveries through his team’s first 11 games of a season.

“To be able to get to those games now as a coach, to be able to watch him every day in practice, it’s a dream come true,” he said. “Just being able to be on the same bus, on the same trip, on the same itinerary, it’s a blessing.”

Added Ace, who transferred to Tech in January 2021 following three seasons at the University of Maryland: “Throughout my football career, there’s never been a time really when we’re in the same building or sometimes even in the same state during the football season . So it’s just great. It’s my last college season and it’s great to have him here throughout the whole thing.”

Ace’s nickname, naturally, originated in a coach’s office. When Donald, then the offensive coordinator at Hampton, proudly proclaimed to his offensive line coach John Wright that he and his wife had named their newborn son Ayinde Claude Eley – Claude in honor of Donald’s grandfather, Ayinde for the Yoruba phrase “I prayed that he came” – Taylor knew he’d be overmatched.

“He was like, ‘I don’t know how to pronounce Ayinde, so we’re just going to call him Ace.’ And that name has followed him since he was born,” Hill-Eley said (Donald remains one of the few holdouts who still calls him Ayinde).

So began a relationship forged in football. When Donald was named head coach at Morgan State in 2002, he often brought four-year-old Ace with him to the team’s predawn conditioning workouts.

“I would go into 7-Eleven and grab my coffee. He’d grab a donut and some juice and at 5:30, 5:15, he’s walking behind me as we’re running the guys and getting them going. And that had become a regular tradition,” Donald recalled.

Ace’s Mom, Dr. Songhai Barclift, works as an obstetrician and kept her own grueling hours. During the school year, Hill-Eley would occasionally rouse Ace out of bed, bring him to the Morgan State coaches’ offices, lay out an air mattress, and let him fall back asleep before it was time to head to school. 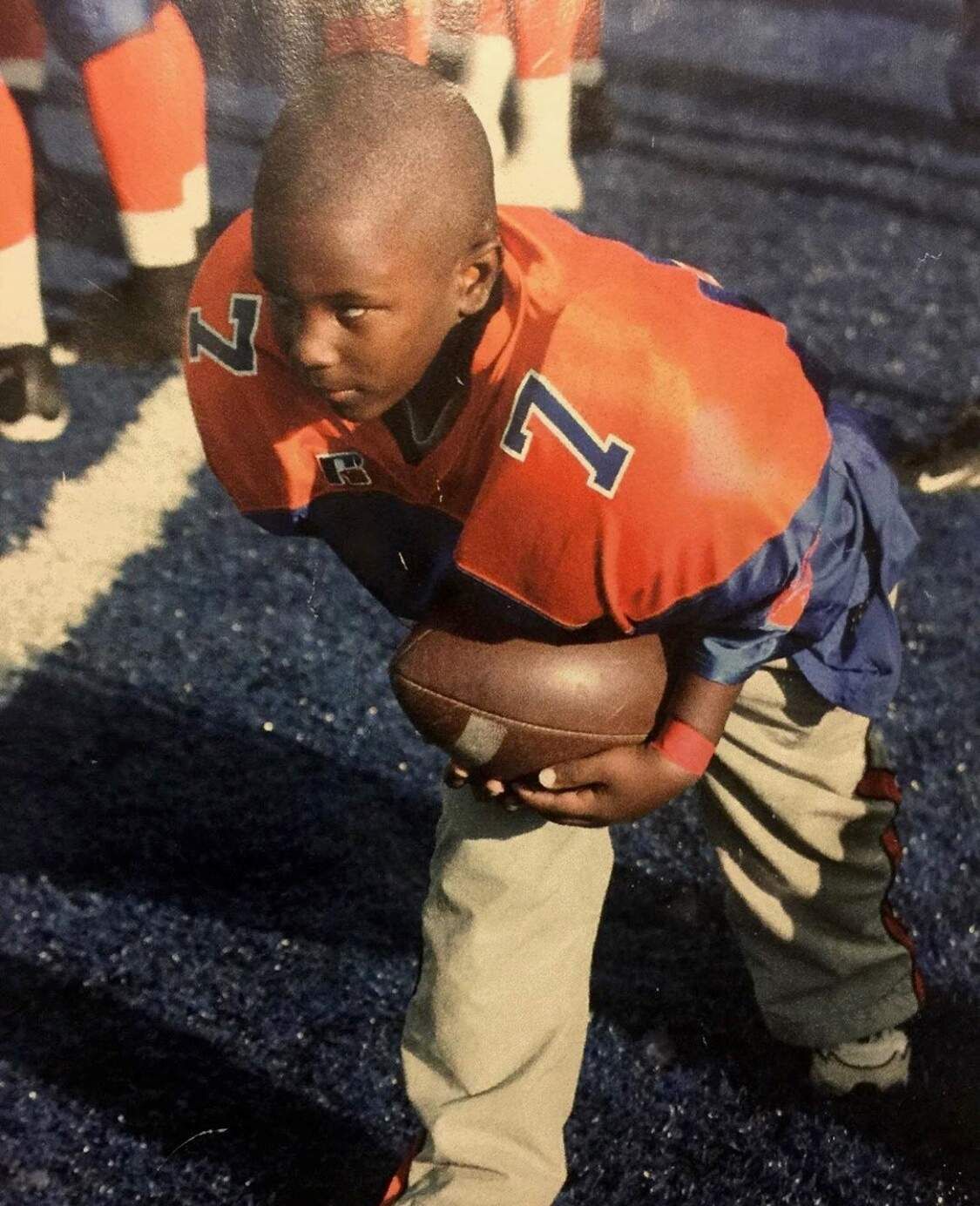 Ace Eley was a regular on the Morgan State sidelines while his father, Don, was the head coach of the Bears from 2002-13.

Surrounded by football, Ace grew into a sturdy linebacker prospect at Our Lady of Good Counsel High School in Olney, Md. When Hill-Eley was let go as Morgan State’s head coach shortly after Ace’s freshman season, they soon had to contend with physical separation as well. Hill-Eley took a job coaching wide receivers at Norfolk State while Ace stayed behind in Maryland with his Mom. A year later, he was named offensive coordinator at Alabama State.

To watch Ace play, Hill-Eley had to thread a fine needle. Bye weeks and the occasional weeknight games would often be the only times he could duck out of town to catch one of Ace’s games. Even then, opportunities were scarce.

“I may have done two games a year in high school. When he was at Maryland for those three years, I made three games. When he got here [to Georgia Tech]I made two games,” Hill-Eley estimated.

Father and son tried to connect as best they could.

“I would watch the highlights and then he would call. It’s like, ‘Hey, you lost control.’ So I’m watching him and grading him. I don’t know how enjoyable that was for him, because then he had to go back and listen to the coach,” Hill-Eley recalled.

“I wasn’t just able to sit there as a dad and just raise the hand and celebrate a good tackle or just to say, ‘Good job, good hustle,'” he added.

As fate would have it, he wouldn’t have to forsake one or the other. At Georgia Tech, Hill-Eley has had the chance to both continue his coaching career and soak in some long-lost quality time with his son.

“While we’re both in the building, we’re both working. But when you sit back and think about it, it’s a great thing to have. It’s a blessing,” Ace said.

The hours remain long, the free time scarce, but Donald and Ace have made sure to carve out their moments together. They see each other in team meetings or milling around the hotel on road trips. There are the lunch runs to grab the occasional fish sandwich. Every week, Ace’s stepmother Kelley prepares food from home, which Donald takes in with him. Ace knows to skip the training table that day.

“He’ll bring a couple buddies up here to the office. We’ll just sit and have lunch and just talk about everything other than football,” Donald said.

The interaction could be as brief as a fist bump when they pass each other in the hallway. But after so many years apart, Ace and Donald have learned that just being around each other is its own reward. Even mundane topics are cherished.

“I even find joy when he asks me, ‘Hey Dad, how many miles before I need to get an oil change?’ Even that little conversation – you get to be a dad. All those things, when you make certain sacrifices like I’ve had to be a coach and being at different places, I didn’t get that opportunity. I had to send someone if he needed help to go check on my son. And now I get to do that myself,” Donald explained.

But father and son both know when to switch the relationship off. When Hill-Eley coaches the running backs at practice, he’s aware that he’s leading them against a linebacking corps headed by Ace.

“I told the running backs that child belongs to me, hit him just as hard as you hit the rest of them. We have to keep him from our side of the ball. Once he hits the field, he’s a defensive player. I’m an offensive coach,” said Hill-Eley.

He and Ace will have another chance to create memories in Georgia Tech’s regular-season finale against Georgia (12:00 pm ET, Georgia Tech Sports Network from Legends Sports). Time may be running out on their lone season together, but the longtime coach and his linebacker son are confident they’ve made the most of it.

“As a coach, I feel proud about him,” Hill-Eley said.

“As a parent, my heart bubbles over for him.”