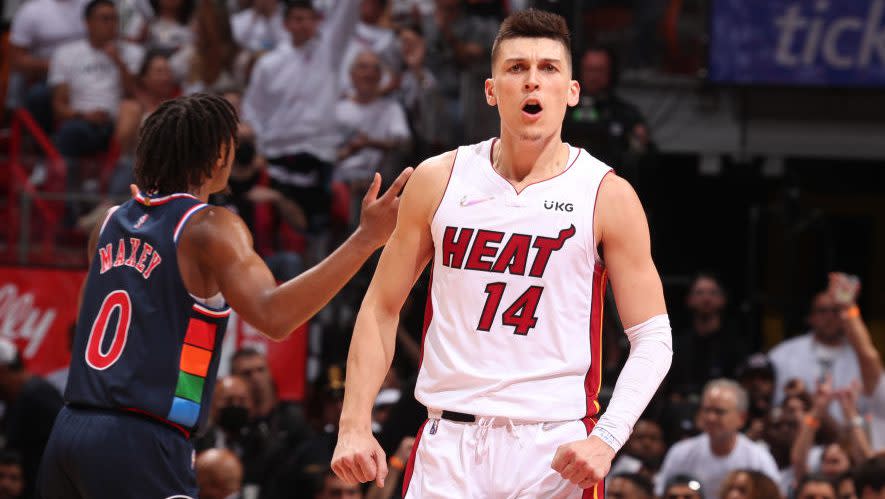 Without Joel Embiid to lean on, Doc Rivers searched for something – anything – that would work. It certainly wasn’t DeAndre Jordan, but there wasn’t much of anything that did work for the 76ers in Game 1.

Erik Spoelstra and the Heat know exactly what works for them and leaned hard into that second half – defense, ball movement, and a heavy dose of Tyler Herro and Bam Adebayo.

The story of this game – and maybe this series – was the absence of Sixers’ MVP finalist Joel Embiid due to a concussion and orbital bone fracture. He is not in Miami with the team, but Philadelphia hopes he can return for Game 3 or 4. Game 1 was evidence of how much he means to Philly on both ends of the court.

Rivers began the night trying to be traditional, starting DeAndre Jordan at center to replace Embiid (something that had the backing of key 76ers players). Starting Jordan might have been an acceptable move in 2017, but in 2022 he has little to no lateral movement, which led to the Heat getting whatever they wanted on offense – Miami had 18 points on their first nine possessions and raced out to an 18- 6 lead.

The 76ers were -12 in Jordan’s first quarter minutes. Rivers went back to Jordan several times in the game, and the veteran big man finished with four points, two rebounds, and was a -22 on the night.

After the game, Rivers had Jordan’s back.

Rivers does have a playoff history of sticking with what he thinks should work / wants to do in the face of evidence it does not.

Rivers tried Paul Millsap, but the Sixers were -2 in those first-half minutes and the veteran was overwhelmed. Rivers finally leaned on Paul Reed and his athleticism worked, Philadelphia was +5 in his minutes for the game, but a couple of youthful mistakes got him in foul trouble kept him limited to 13 minutes.

Philly had its best success without a center. The 76ers went small with just more than 4:30 left in the first half and the Heat scored just two points the rest of the way, being outscored 11-2. Those minutes completed the 76ers comeback and them up 51-50 at the half.

In the second half, the Heat cranked up their defensive pressure, crashed the offensive glass – they got the offensive rebound on 35% of their missed shots this game – and got great play from Herro.

Miami also shot just 9-of-36 from 3 for the game and missed a lot of clean looks – their offense could be a lot stronger. It will also be better organized and some of the sloppy turnovers will go away when Kyle Lowry returns (Chris Haynes reported on the TNT broadcast that could be as soon as Game 2).

Philadelphia found some things that worked. Tobias Harris had his best game of the postseason with 27 points plus a solid defensive effort, and Tyrese Maxey added 19 and his quickness was key to some 76ers’ runs. Philly found that a zone defense could work for stretches.

But they will need a lot more than that. James Harden had 16 points on 5-of-13 shooting with five assists – he was again good but not elite. The 76ers need elite, especially with Embiid out, but even when he returns.

It has to come together fast for the 76ers, because if they go down 0-2 to the top-seed Heat a comeback will be very long odds.

Check out more on the Heat

76ers search for what works, Heat already know, run away with Game 1 originally appeared on NBCSports.com